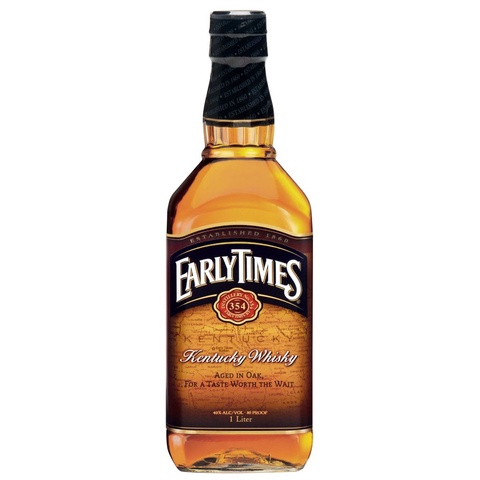 Early Times features a light, mellow taste and aroma with notes of honey and vanilla. It is a time-honored taste originating from the brand’s post-Prohibition era yeast strain, meticulous double-distilling, and a three-year aging process. As it was during its early days, Early Times is still aged in temperature and humidity-controlled warehouses, enabling distillers to simulate seasons more quickly, and “mature” the whiskey more quickly. The characteristic mellowness of Early Times can be attributed to one of its unique strengths: its connection to Jack Daniel’s. While Early Times is a corn-based, Kentucky whiskey like other bourbons, it is aged in charred oak barrels which formerly held Jack Daniel’s whiskey. The seasoned barrels allow the new whiskey’s dill character to sur¬vive, mellowed by vanilla notes in the wood. Because of the recycled barrels, Early Times does not fit the legal definition of a straight Kentucky Bourbon, which must be aged in a new, charred oak barrel. Early Times is known instead as a Kentucky Whiskey. AROMA:Heavy caramel with a faint sweet coffee taste, oranges, oak and sweet cured tobacco notes linger in its depths. TASTE: Soft, mild with very light oak, subtle sweetness, and herbal grass notes. FINISH: Mild, slightly-dry apple peel freshness lingers on. PROOF: 40%

at Departure
on Arrival

at Departure
on Arrival